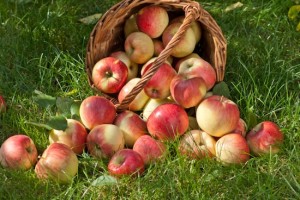 The land on which the present day Altamont Orchards is located is rich in history. The original deed for the farm, which sits at the base of the Helderbergs, is dated February 2, 1792; for the lease of the farm to William Ward from Stephen Van Rensselaer.

Since the late 18th century, the farm has been leased and sold a number of times.

The first orchard was planted by Dr. Daniel Cook, an Albany physician in the early 1900’s who was interested in the new science of growing apples. His son, Daniel Jr., along with a resident manager continued to run the farm as a business from his Albany home until his death in 1952.

Shortly after Mr. Cook’s death, his wife sold the farm to Robert and Elsie May for the purpose of building a housing development on the farm. When this idea fell through in 1956, the original Cook farm of over 250 acres was sold to William C. Paladino, President of Altamont Farms, Inc., Highland, NY, a subsidiary of Hudson Valley Apple Products, Inc., one of the largest growers and packers of apples in the Northeast.

In 1962, Mr. Paladino purchased the Wade and Amy Schwartz farm on Lainhart Rd. containing over 160 acres of land which the corporation would plant in apple trees over the next few years. In the Fall of 1967, Mr. Paladino sold the farm to Joe and Ellen Abbruzzese. The Abbruzzese family became the first owners to live and work on the farm. In 1969, they built the first Farm Market on the property.

In 1978, they purchased the adjacent farm of John Armstrong, which allowed the addition of strawberries, grapes and vegetables to be produced.

In 1981, the family built the current farm market, which is now home to their Specialty Foods, Bakery, Farm Store, Gift Shop, and Greenhouses

In 1986, Joe and Ellen turned over the day to day operations of the farm to their sons Joe, John, Dan and Jim. This is when Altamont Orchards, Inc., was formed as an operating corporation.

In 1993, the adjacent farm of Anna Anthony was purchased by the family to further diversify their crop mix and for additional parking for the Farm Market. This purchase has now lead to the development of the Orchard Creek Golf Club and the Cider House Restaurant.

In 2007 Orchard Creek was awarded the 2008 N.Y.S. Course of the Year by the National Golf Course Owners Association.

In 2013, we purchased the right to be a vendor at the Altamont Fair.   We continue to work every August to make Cider Donuts for the Fair-goers.   Its a tradition that has been in place since the 1960’s.

In 2018, Altamont Orchards will celebrate its 50th year of producing a crop at the farm location.   We are proud of the fact we have been involved with the community during our journey in agriculture.

Our promise to the community and to our loyal customers is to continue to raise and market only the finest products for your enjoyment.